Brief introduction to the Hub 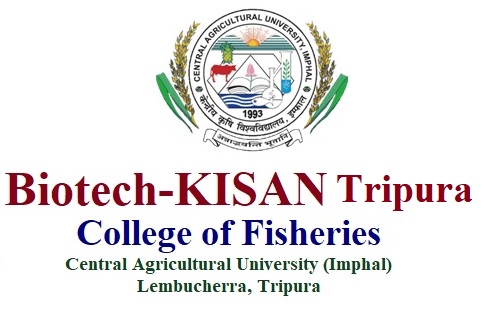 The renowned agricultural scientist Dr. M.S. Swaminathan describes north eastern (NE) region of India as genetic paradise and granary of mega biodiversity in terms of flora and fauna as well as micro-flora and micro-fauna. Despite having natural endowment productivity, the production is very low due to lack of proper training and knowledge among the farmers of the NE region. The Central Agricultural University, Imphal was established with a vision to develop the agriculture and allied sector and improved livelihood of people in the entire NE region. To achieve this goal, university established many colleges in different NE states only after analyzing and prioritizing the need of the particular states. Since fisheries is one of the every household activity in Tripura, College of Fisheries was established in the state of Tripura in the year 1998. College of Fisheries, Tripura, imparts B.F.Sc., M.F.Sc. and Ph.D. teaching programs. Apart from academic excellence, College has successfully executed several high-volume projects for addressing the problems in fisheries and aquaculture and trainings in NE and country like Center of Excellence in Fisheries and Aquaculture Biotechnology, DBT Institutional Biotech Hub, Twinning projects, Bioinformatics Center, National Agricultural Innovative Project, Mega Seed Project etc. funded by different organization like DBT, DST, MoFPI, NFDB, ICAR, Govt. of India. College regularly imparts training to farmers, SHGs and line department personnel from entire NE region on various aspect like soil and water analysis, fish culture practices, quality fish seed production of several cultivable fish species and fish processing and value addition, funded by several organization including CAU, Imphal. Tripura state is having the highest per capita fish consumption among all the Indian states. The Department of Fisheries, Government of Tripura is taking important role towards food security of the people of the state as fish is an important constituent of daily diet as more than 95% of its population is fish eaters. The Fisheries Department is making all out efforts to implement various developmental schemes in the state. An area of 33,217.46 ha is presently under use for fish production in the state and by implementing developmental schemes particularly in the rural areas, encouraging results could be achieved. But aquaculture is a relatively less organized enterprise in the state, dominated by small and marginal fish farmers with an average pond area of 0.17 to 0.5 hectares. Indian major carps (IMC) viz. catla, rohu and mrigal are the mainstay aquaculture. The demand of fishes other than carps like pabda, Puntius sarana, magur is high in the region. But the technology for the seed production of these species is not popular among the fish breeders/ fish farmers in the region. These species are relatively hardy and can grow in water bodies with low water depth. Apart from these, integrated fish farming like pig based fish farming is very popular among tribal populations of the state. So, these species and farming system can be promoted through training and demonstration among the farmers. The training and demonstration of various interventions of the project will be conducted in association with Department of Fisheries, Govt. of Tripura.


Brief regarding the partnering Institute

KVK of South Tripura district is situated at Manu, 80 kilometers from Agartala on Agartala-Udaipur-Sabroom road. It was established under the administrative control of ICAR Complex for NEH Region. Since inception this KVK has been endeavouring for the upliftment of socio-economic condition of the farming community of the district through scientific intervention in the agricultural and allied sectors. The KVK is actively involved in demonstration of the latest agricultural technologies to the farmers as well as extension workers of different departments, test and verify the technologies in the socio-economic conditions of the farmers, impart trainings to the practicing farmers/farm women, rural youth and field level extension functionaries, back-up with training and communication supports to the district level development departments.

Sepahijala is characterized by variety of land use types and agricultural systems. The agriculture is the main source of livelihood to the people of the district. The major food crops of the district are cereals, pulses, oilseeds and potato. The agro-climatic conditions are suitable for the production of temperate to sub-tropical fruits such as pineapple, citrus, mango, litchi, guava, banana, pineapple, jackfruit, etc. For improving the overall agricultural productivity in the district, concerted efforts towards removal of different production constraints confronting agriculture should be taken. To achieve this goal, farmer should be trained accordingly and in this context KVK, Sepahijala was established in 2019. This project proposal aims to increase the capacity of the farmers, farm woman, and rural youth by developing the skill among them by technical expertise of KVK Personals.

Area covered under the project